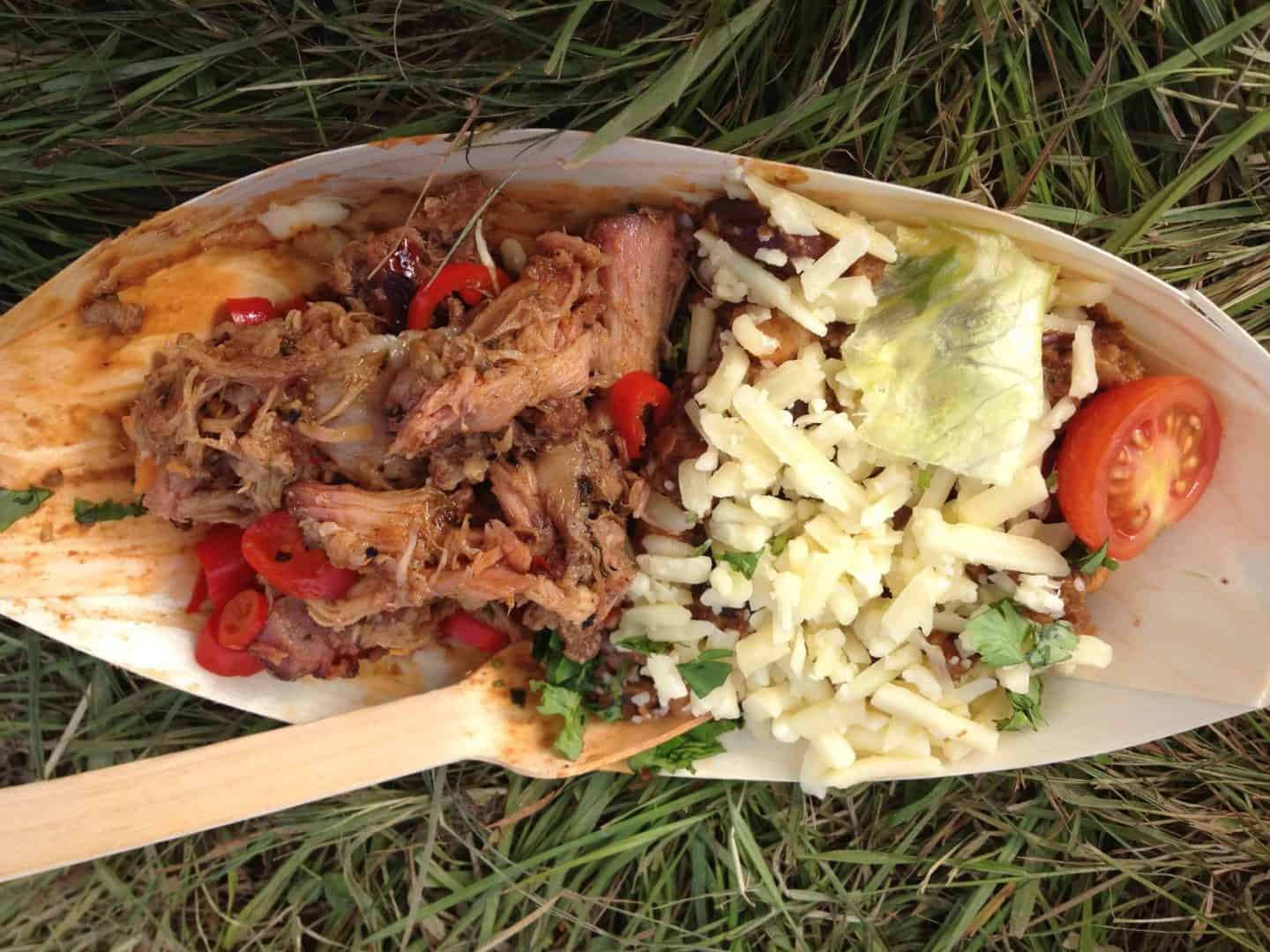 I’ve spent since January being excited about the brand new Somersault Festival in Filleigh, North Devon and ticking off seeing Jack Johnson live from my bucket list! I’ve wanted to see him since I was about 14 so it was a dream come true to find out he was playing practically on my doorstep!

I didn’t really think a lot about the logistics of eating gluten free at a festival until about 24 hours beforehand, so I packed up a cool box with a few goodies and hoped for the best! But when we got to the festival (which, by the way, was amazing) I found so many traders offering gluten free goodies and I couldn’t wait to get stuck in and try it all!

Steve and I were also lucky enough to stay in one of the luxury tipis. Situated in front of the gorgeous house of Lady Arran, coming back to a double bed and a duvet was certainly a highlight! But the best bit was the posh toilets and having a coffee van right outside when we got up in the morning. A fresh latte was the perfect way to start the day!

With the sun shining and everyone feeling merry, it was an absolutely amazing weekend – here’s some of my favourite foods from the weekend – bring on 2015!!

I was lucky enough to blog two tickets for Steve and I to one of the Longtable feasts, hosted in a beautiful bunting strewn tent in the wild wellbeing area. Long, medieval style tables with pitchers of water in a funky tent awaited us, and I excitedly unravelled the menu, placed like a scroll on my plate, to see what awaited us. 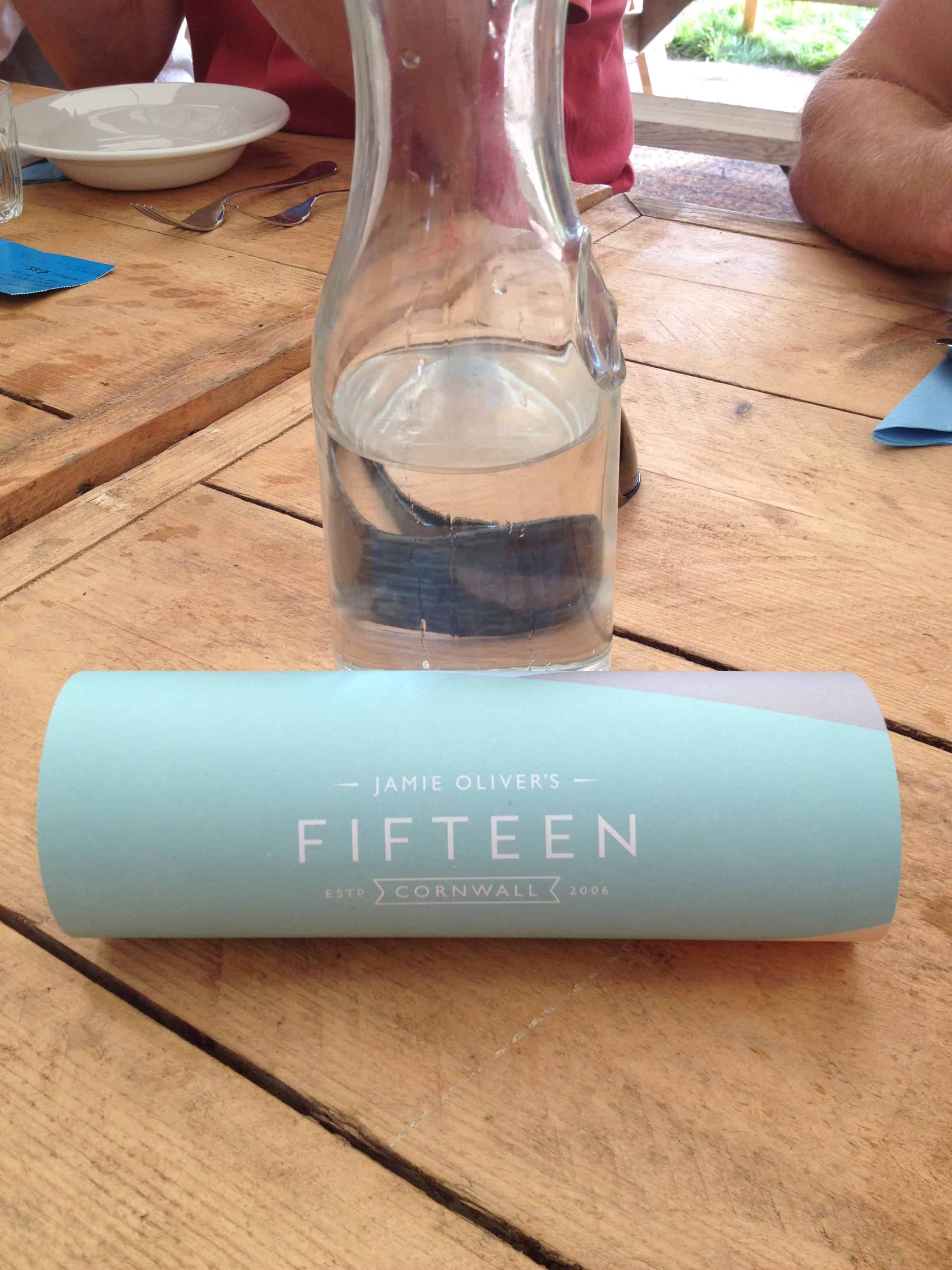 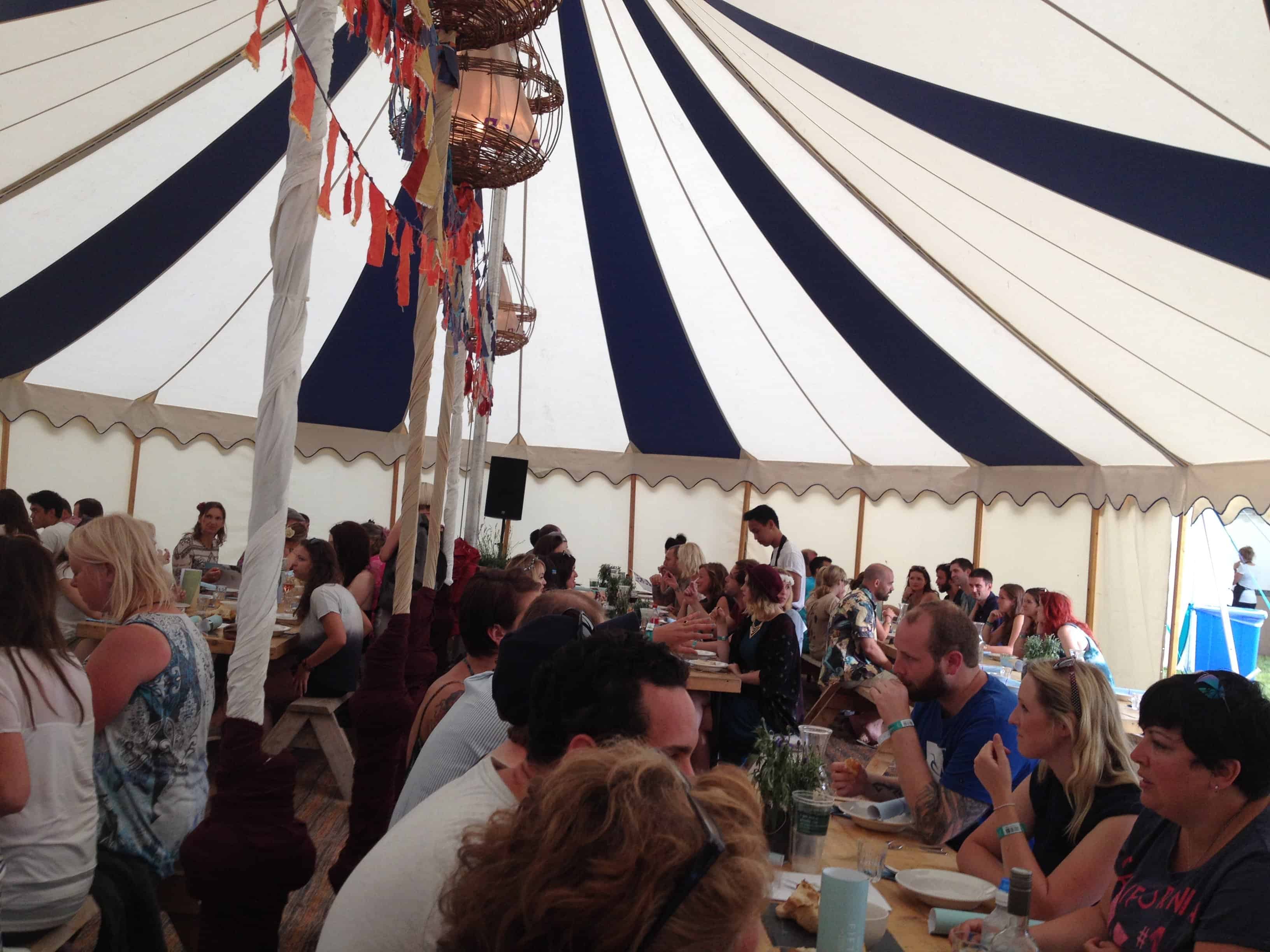 The waitresses were very helpful, explaining to me during each dish what I could and couldn’t eat. For the pre-starter they brought out great hunks of freshly baked bread with a mixture of olives. I had to steer clear of the bread but the olives perfectly whet my appetite for the next course: seafood risotto. 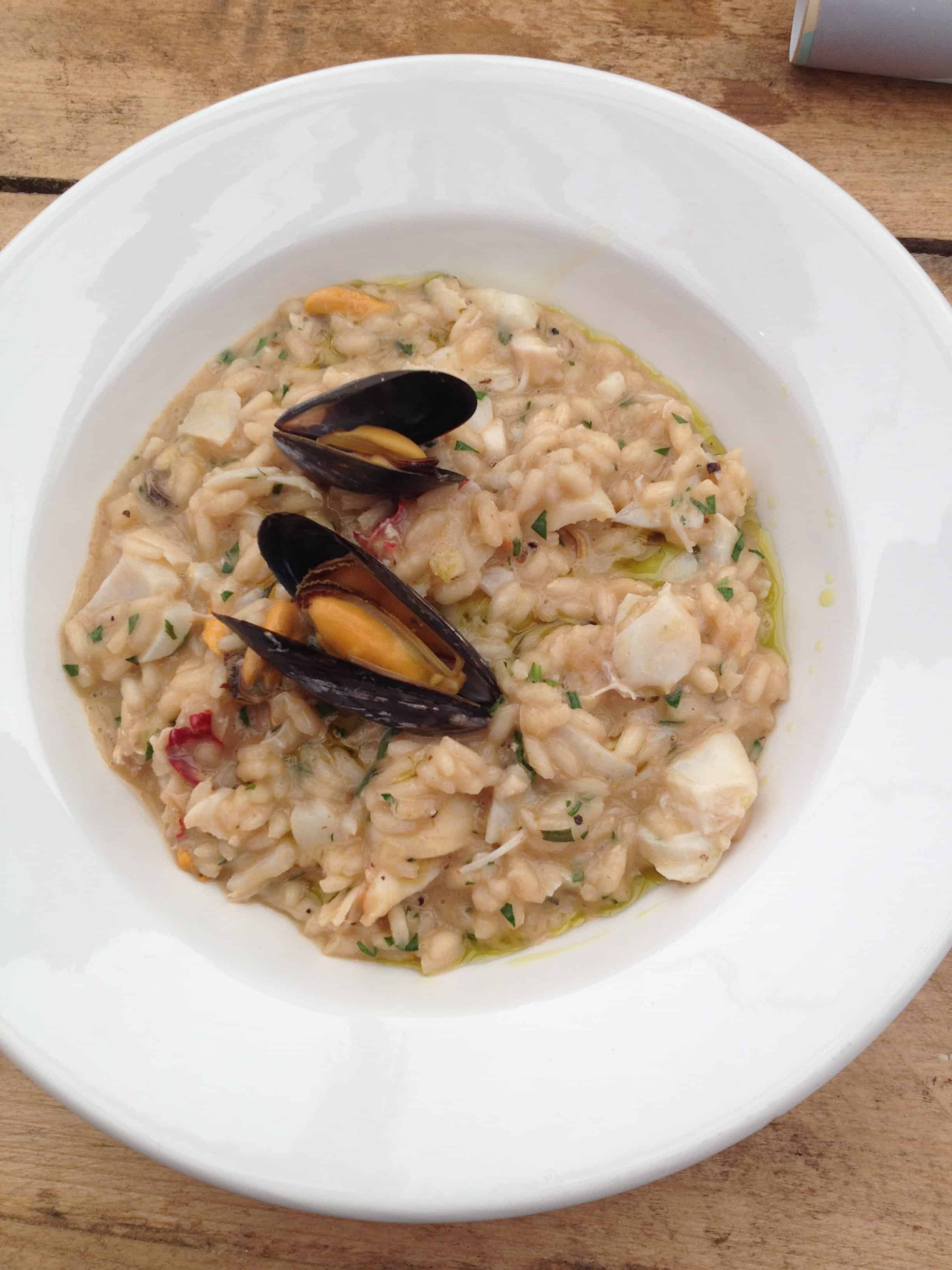 This was out of this world! Because all of the food was served in big dishes to share between six, and the risotto had breadcrumbs on the top, they very kindly brought me out my own bowl. It was beautifully flavoured, with meaty chunks of lobster and a subtle taste complimented by a drizzle of olive oil. Absolutely amazing!

Next was the main course – Steve’s eyes lit up as they brought out platters filled with beautifully cooked meats – whole, tender roast chickens and slices of meat tinged with pink still in the middle. This was accompanied by oven-roasted veg swimming in garlic butter – it was so amazing I completely forgot to take a photo before devouring the lot!

The pièce de résistance though had to be the flourless chocolate hazelnut cake with a pot of fresh clotted cream and strawberries. This was the whole reason I chose this menu and it was truly incredible. Having been on a low-carb diet for weeks, this was a taste of heaven and the instant I ate it I knew the diet was completely out of the window for the rest of the festival! 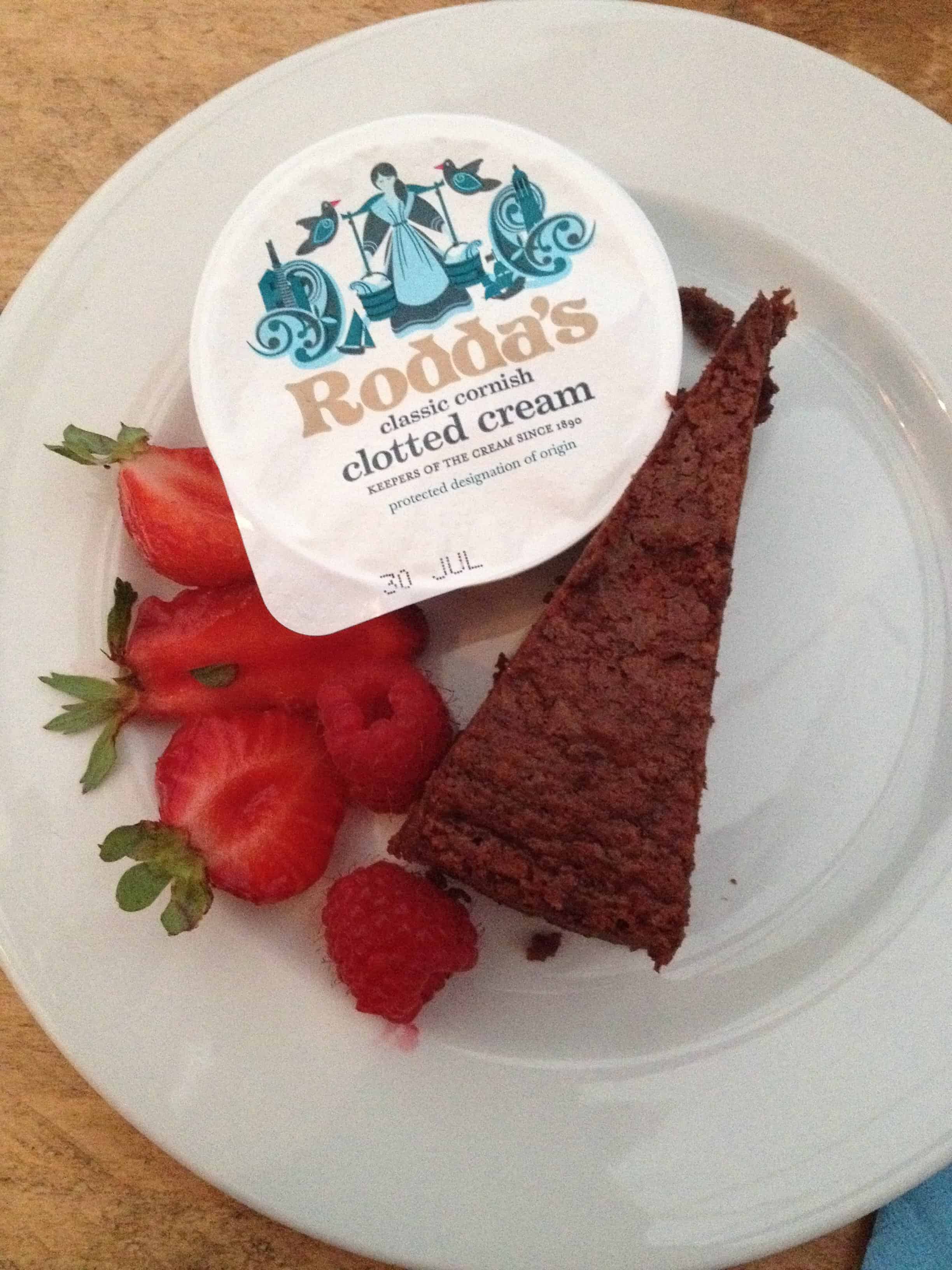 I was pleasantly surprised to find many of the street food vendors offering gluten free options, or being able to easily tell me what I could and couldn’t eat. It made everything so easy to just be able to float between stalls and not worry about being hungry.

The highlight of my meals had to be when Steve and I bought some traditional pulled pork and some garlic chilli, and halved it! Chilli was a staple for me over the weekend, it was something that I was reassured was gluten free and was also reasonably healthy. With the beef, avocado and rice I got  a healthy mixture of protein, fats and carbs, plus it all tasted awesome!

I have a confession to make. After spotting ‘gluten free’ on the board outside The Green Brownie’s stall, I was straight over there. But over the course of the weekend, I may have demolished at least four of these beauties!!

Soft, squidy and oh-so-chocolatey, these were absolutely delicious and although I feared they may sell out, I was very happily kept stocked up on these sweet treats the whole weekend! My favourite was brownie with pink custard, though with ice cream was also yummy! Normally I get frustrated with only being able to eat brownies when I go out, but these were some of the best I have ever tasted so look out for them on the festival scene!!

Somersault was definitely a massive thumbs up from me – I already can’t wait for next year! You can find out more from their website here.