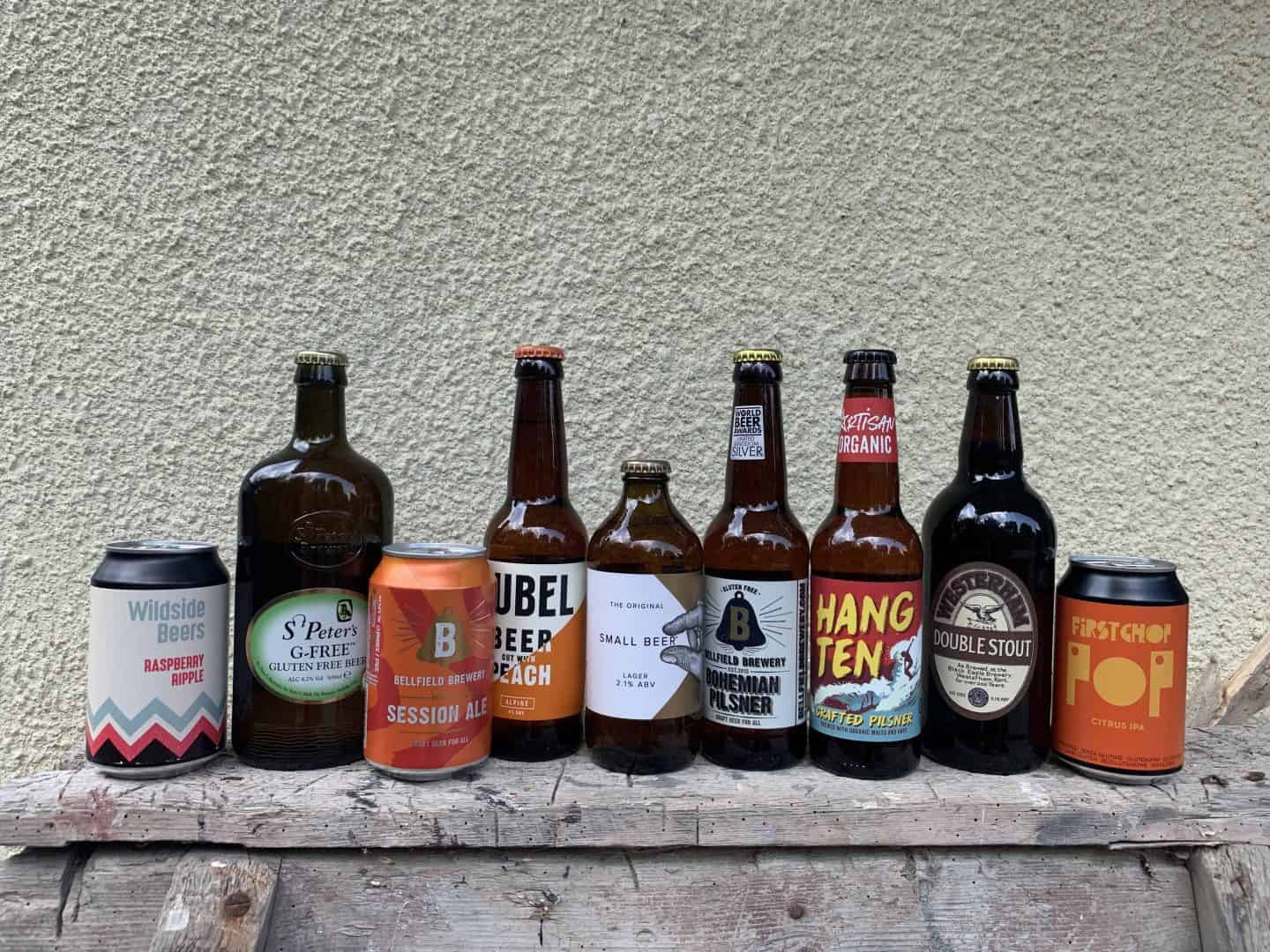 But which gluten free beers are the best in the UK?  I went on a mission to find out! Most of these can be found in the free from aisles but it’s worth looking in the beer aisles as well, just in case. Some are also from smaller suppliers which you can order online, or beer subscription boxes. I’ve definitely found some gluten free beers that I’d never seen in the free from aisle before, but who deserve a place in this round-up!

Here’s a lowdown on the best gluten free beers I’ll be drinking this summer – let me know in the comments if you can recommend any I haven’t tried! 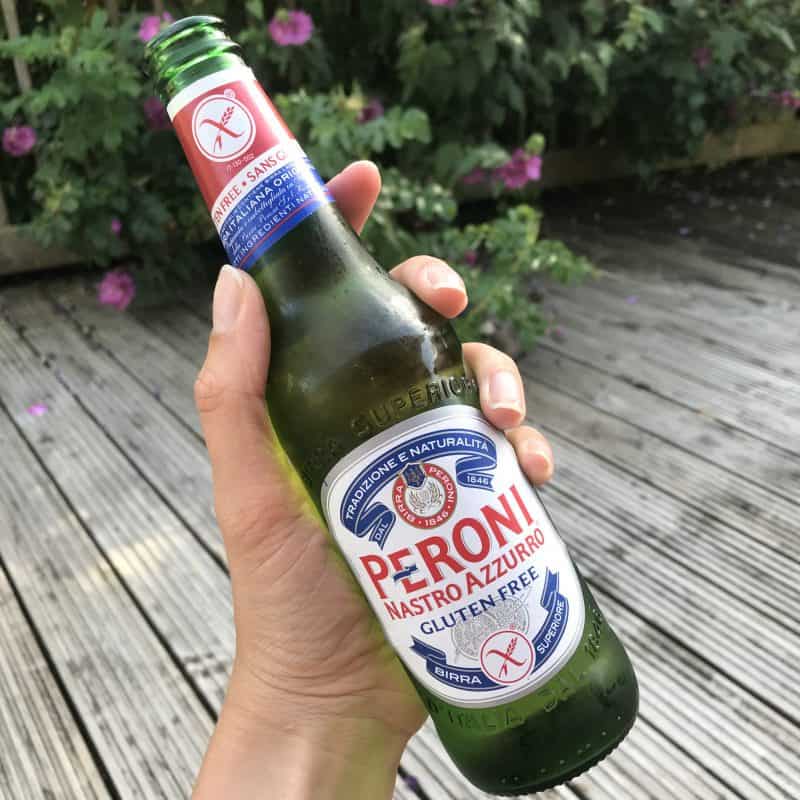 Cold and crisp, I really enjoyed drinking gluten free Peroni last summer – and haven’t stopped since. It’s a nice light beer and easy to drink – plus I love the fact it looks similar to ‘normal’ beers. I’m starting to see this more and more in pubs and restaurants and I think it’s probably one of the most widely available gluten free beers out there. 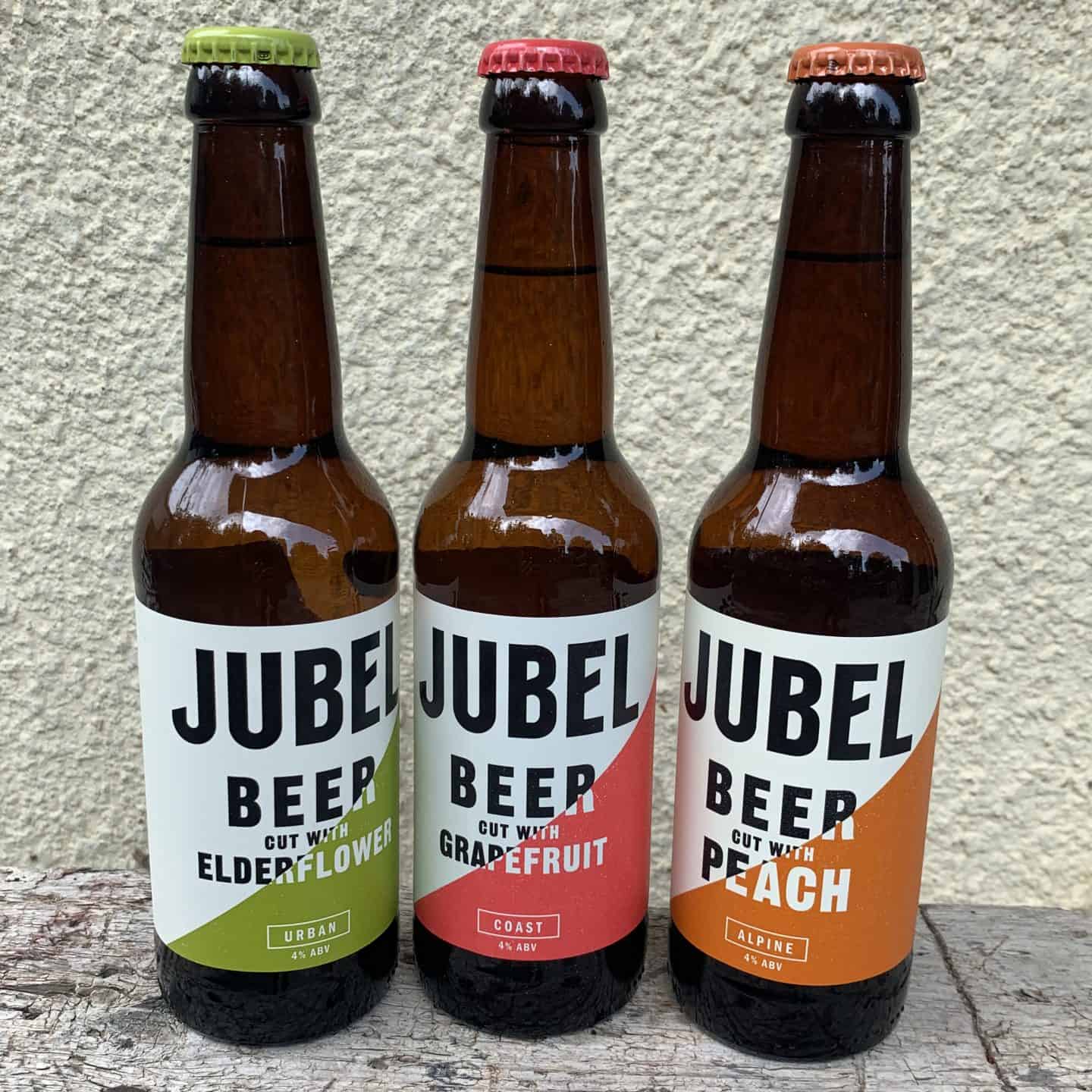 I think this Jubel beer is what made me realise I do in fact love gluten free beer! The Alpine is peach flavoured beer, and the Urban is elderflower flavour. The Jubel Peach Beer

is delicious and fruity, while the Jubel Elderflower Beer

is really light. And the new Coast grapefruit beer is so refreshing and zingy on a summer’s evening! I really love the flavours and the branding – and their labels are plastic free too, which is great! Find the peach and elderflower in Sainsbury’s. 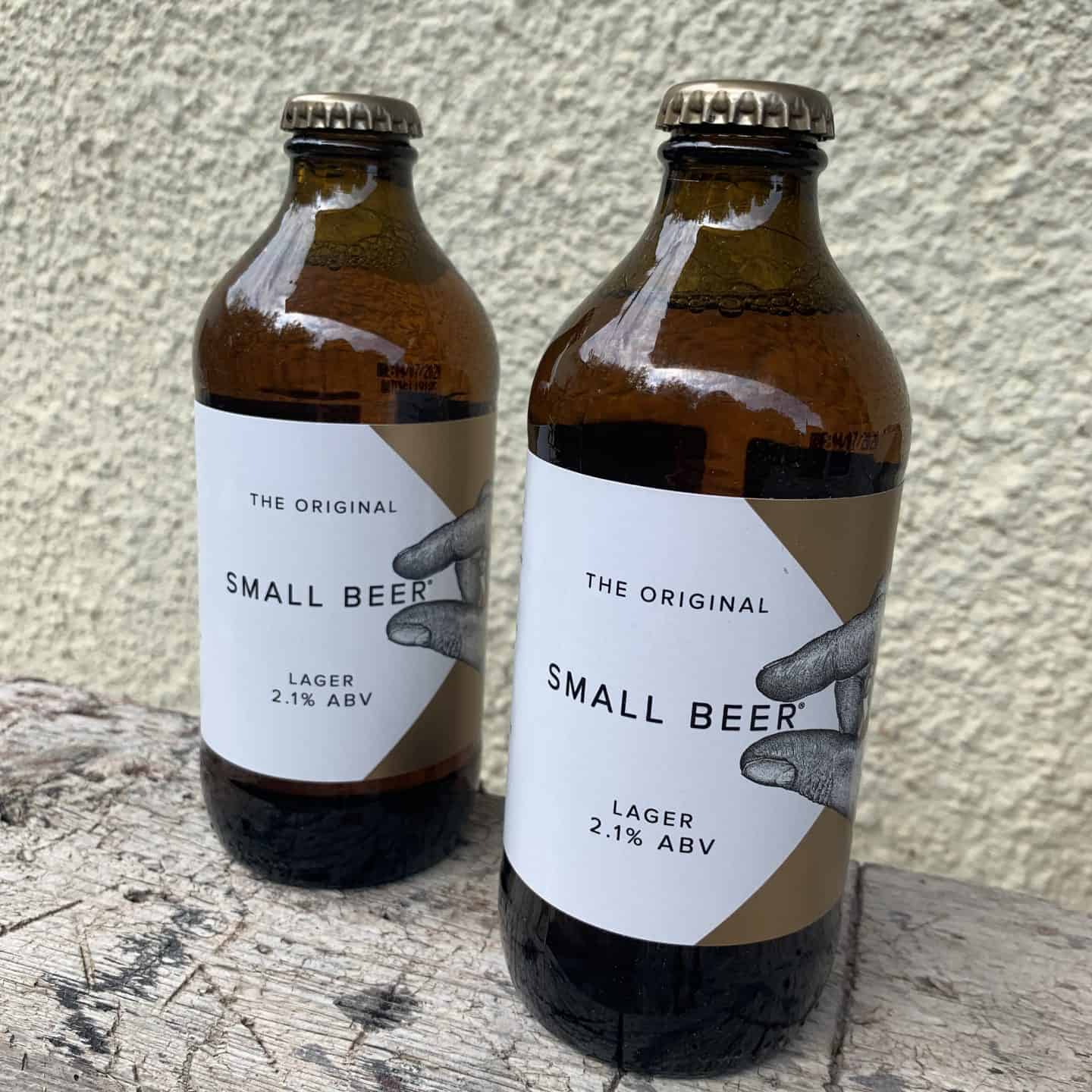 I tried this beer at the Allergy and Free From Show this year and was really impressed. The Original Small Beer lager is gluten free and I absolutely loved the taste and look of the beer. It’s a really refreshing drink and you can see how proud the team were of this beer too. It’s also brewed gluten free instead of using an enzyme to remove the gluten – something they think is pretty unique. 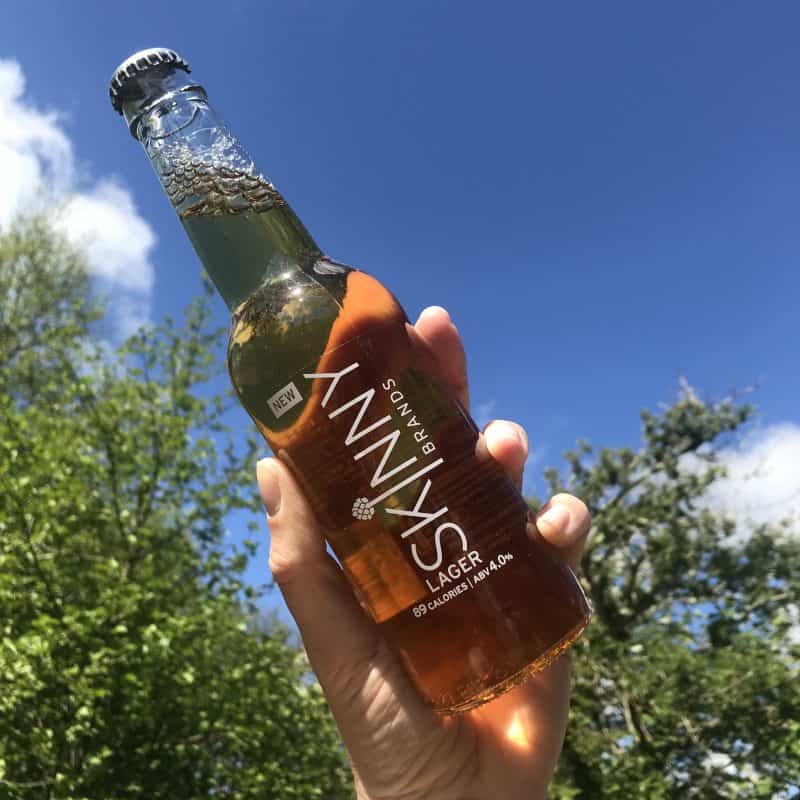 is a great all-round lager which everyone will love. It’s really light, with the right amount of fizz, and comes in at only 89 calories! While I don’t tend to advocate brands labeling themselves as ‘skinny’ products, I really, really love this gluten free beer! 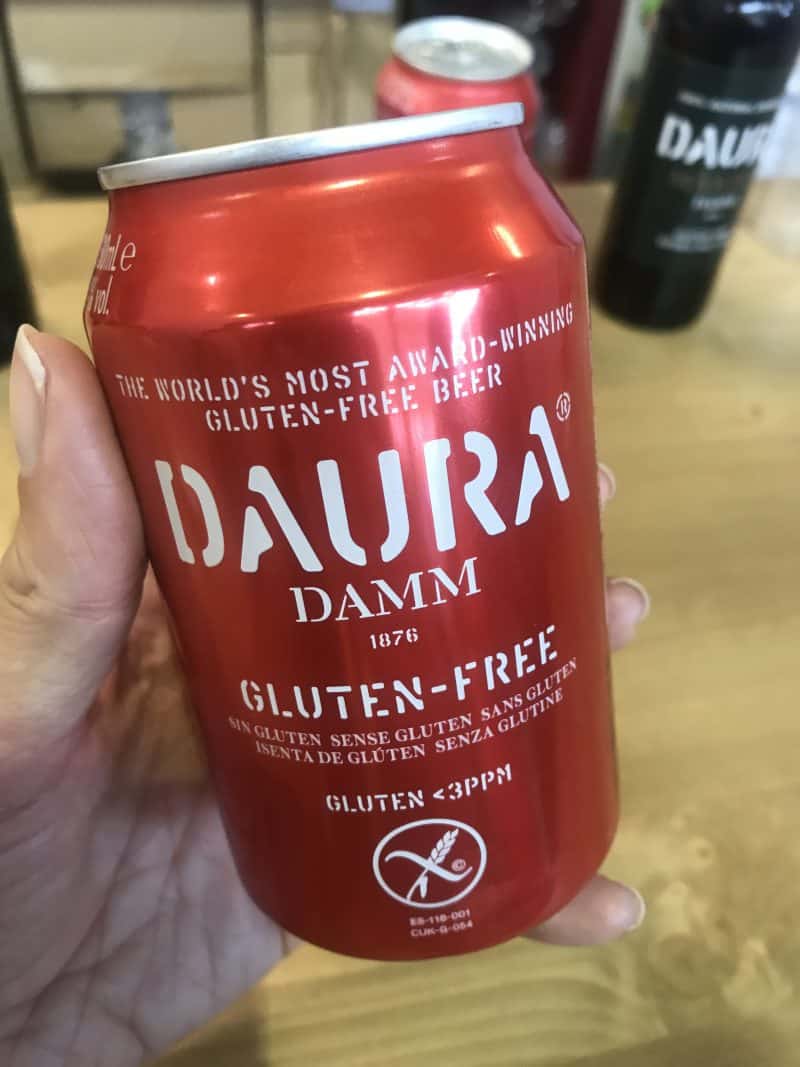 I’ve seen Daura Damn gluten free beer before, but never tried it before the Allergy and Free From Show. I was really impressed, it was crisp and pretty light! Plus they sell it at Honest Burgers, so that’s an absolute bonus. 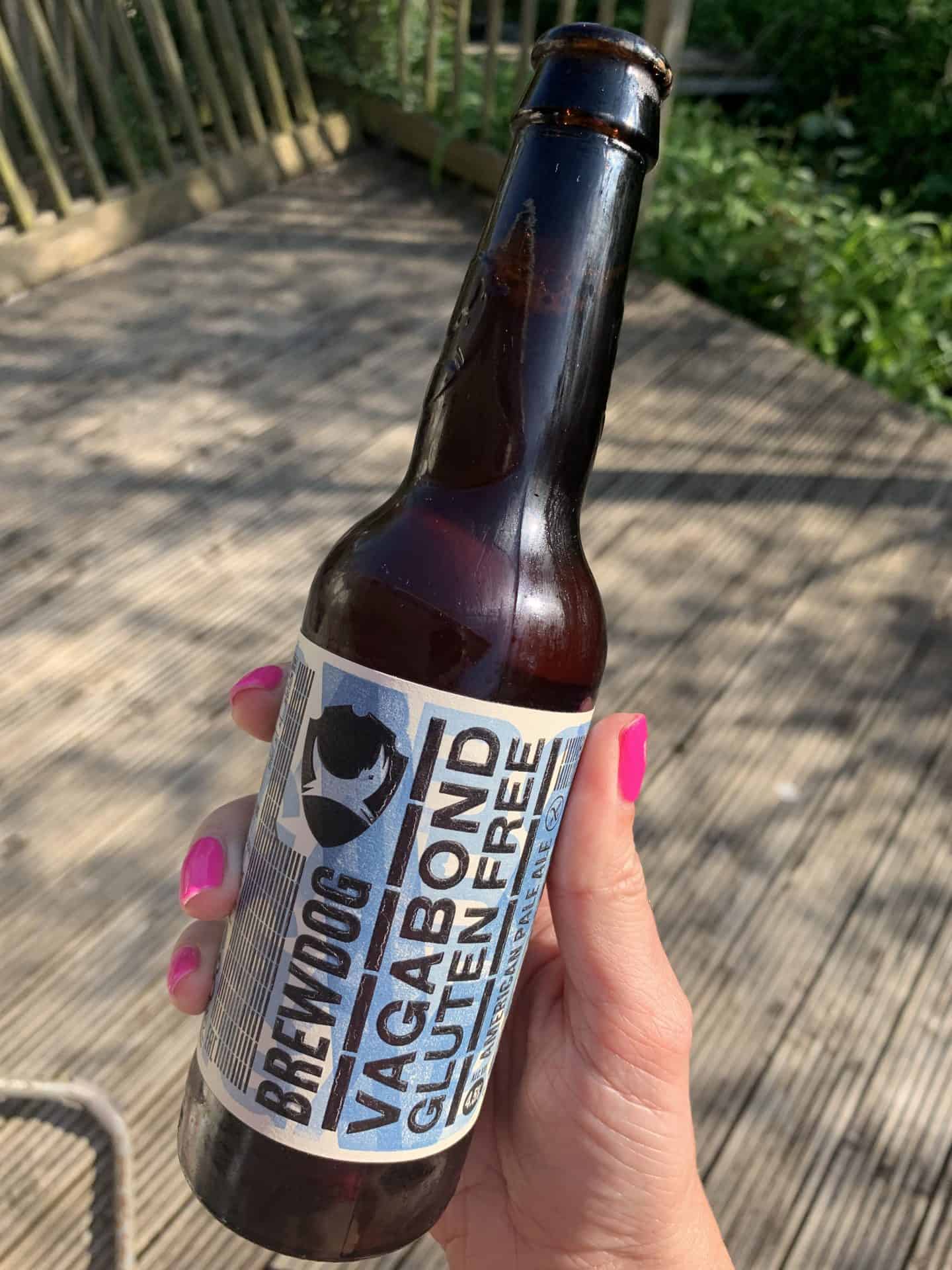 This beer is absolutely delicious, and I love the Brewdog brand. It’s quite a light beer and perfect for drinking ice-cold while sat in the sunshine. It goes down really easily and goes with pretty much anything. Plus they sell it at a lot of restaurants, which is a bonus if you want a Vagabond with your meal! 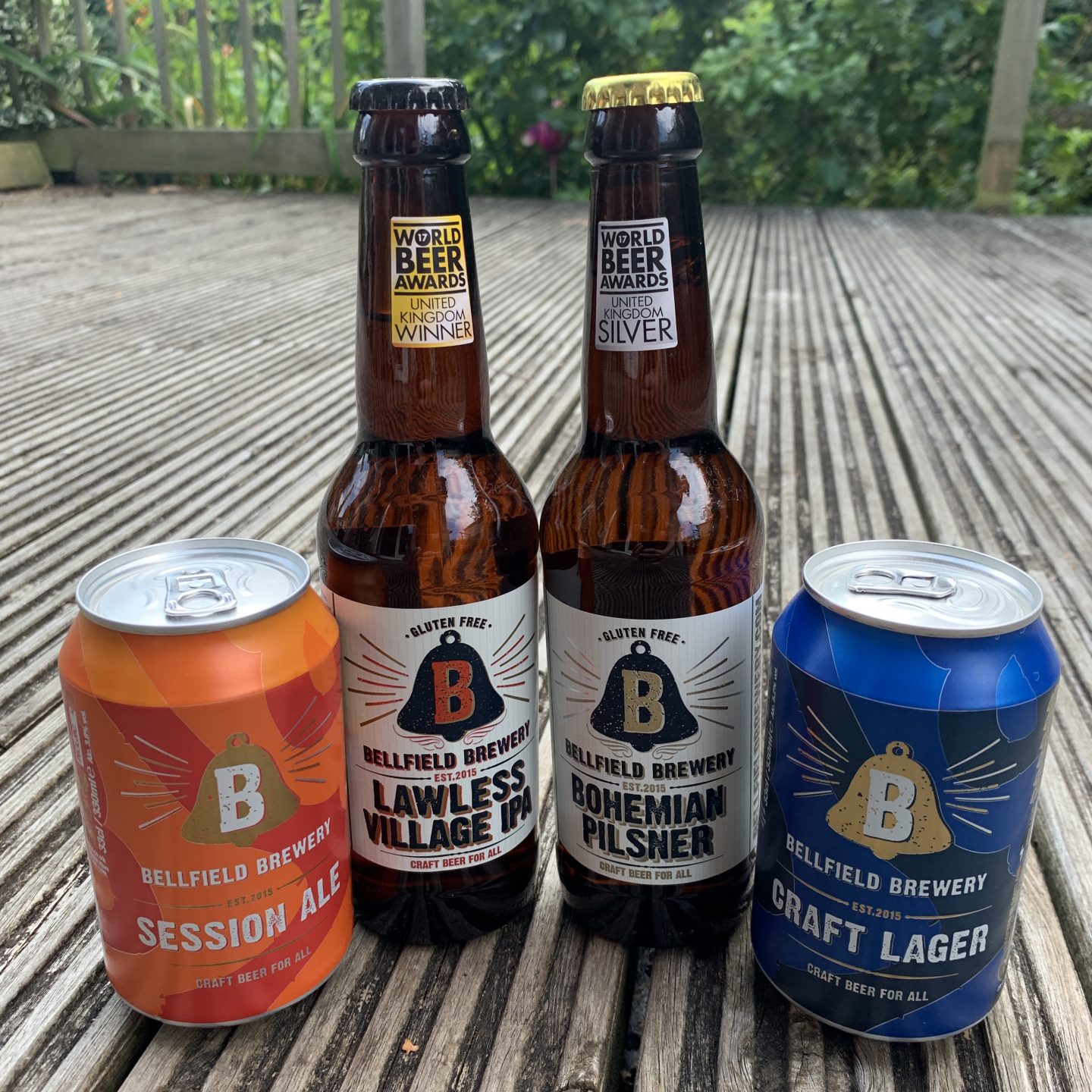 Bellfield Brewery has an awesome selection of gluten free beers, from ale and lager to an IPA and a Pilsner. It’s great because it means there is something to suit every taste. I really enjoyed their lager on a hot summer’s evening – but I can’t wait to try the others too! 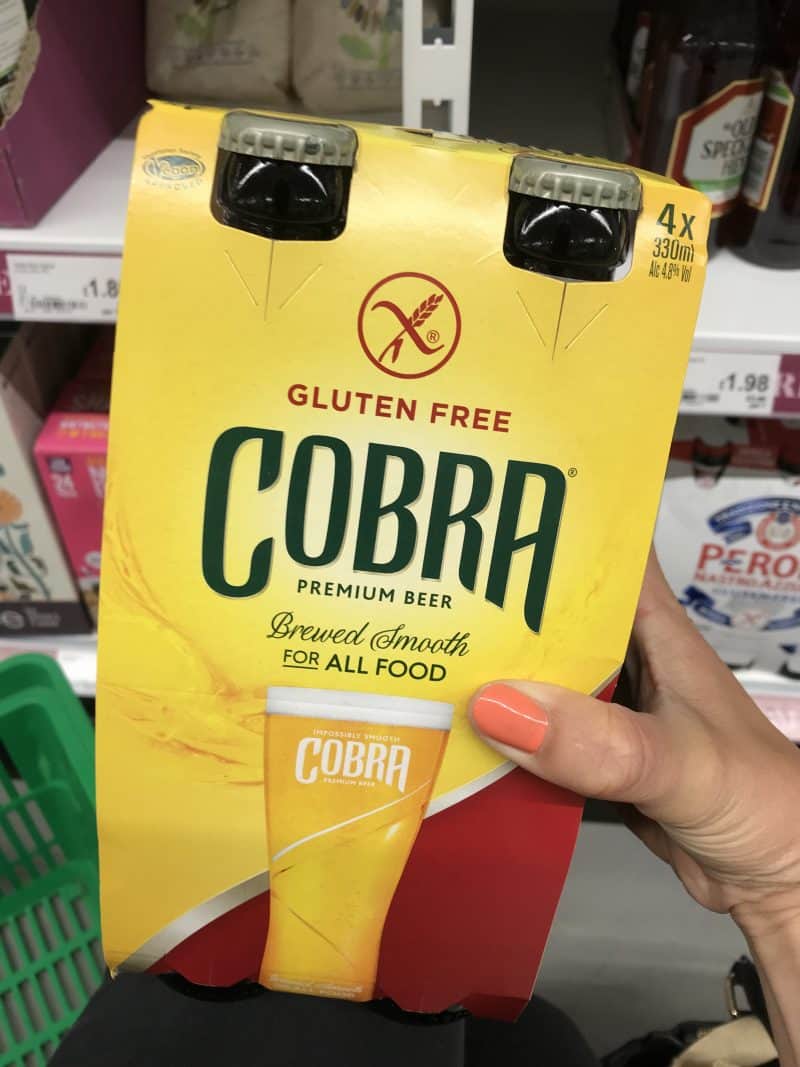 I always associate Cobra with Indian food – so when I first posted a picture on my Instagram of the new gluten free Cobra I’d found in Asda last year, everyone told me to try it with a curry! I wasn’t disappointed, it’s really light and not too fizzy, so it’s the perfect pairing with a take-away! 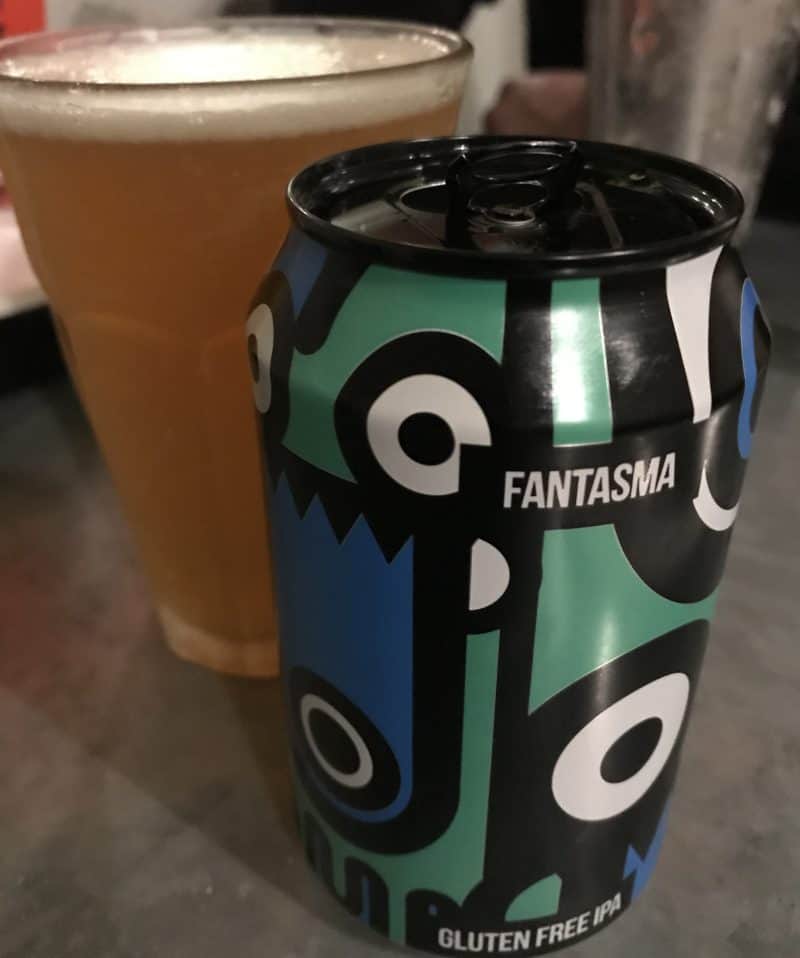 I tried Fantasma beer by Magic Rock Brewery when I visited Byron Burger and it was delicious. A real fruity beer and perfect with a big, fat gluten free burger. I’ve not tried a lot of IPA beers but this was lovely, and luckily they’ve just started selling it in M&S too. 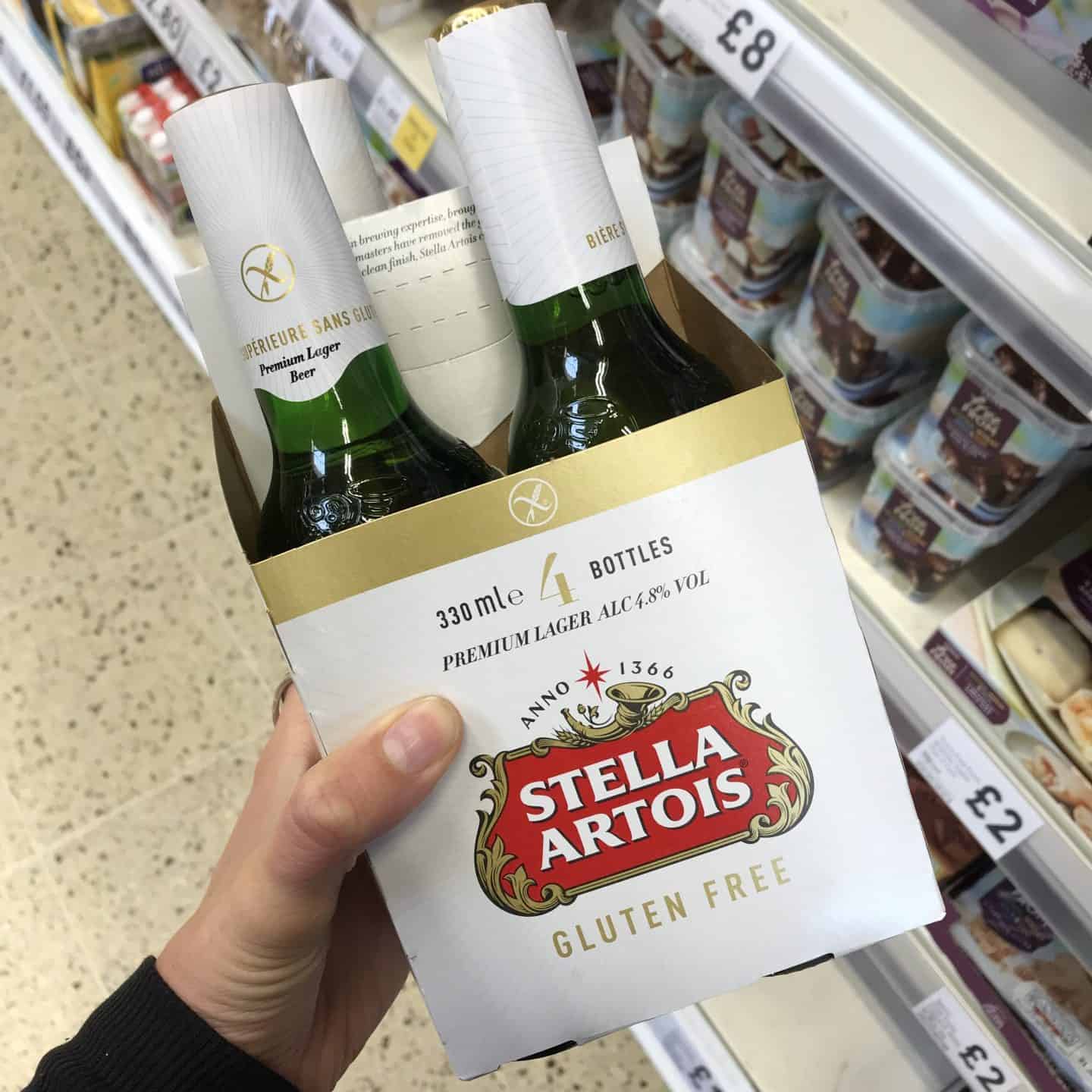 This caused a big stir when it launched in 2018! This gluten free Stella Artois is light and crisp and so drinkable! It’s perfect for kicking back and enjoying a couple of beers and it’s pretty cheap too. I found this pack in Tesco’s free from aisle. 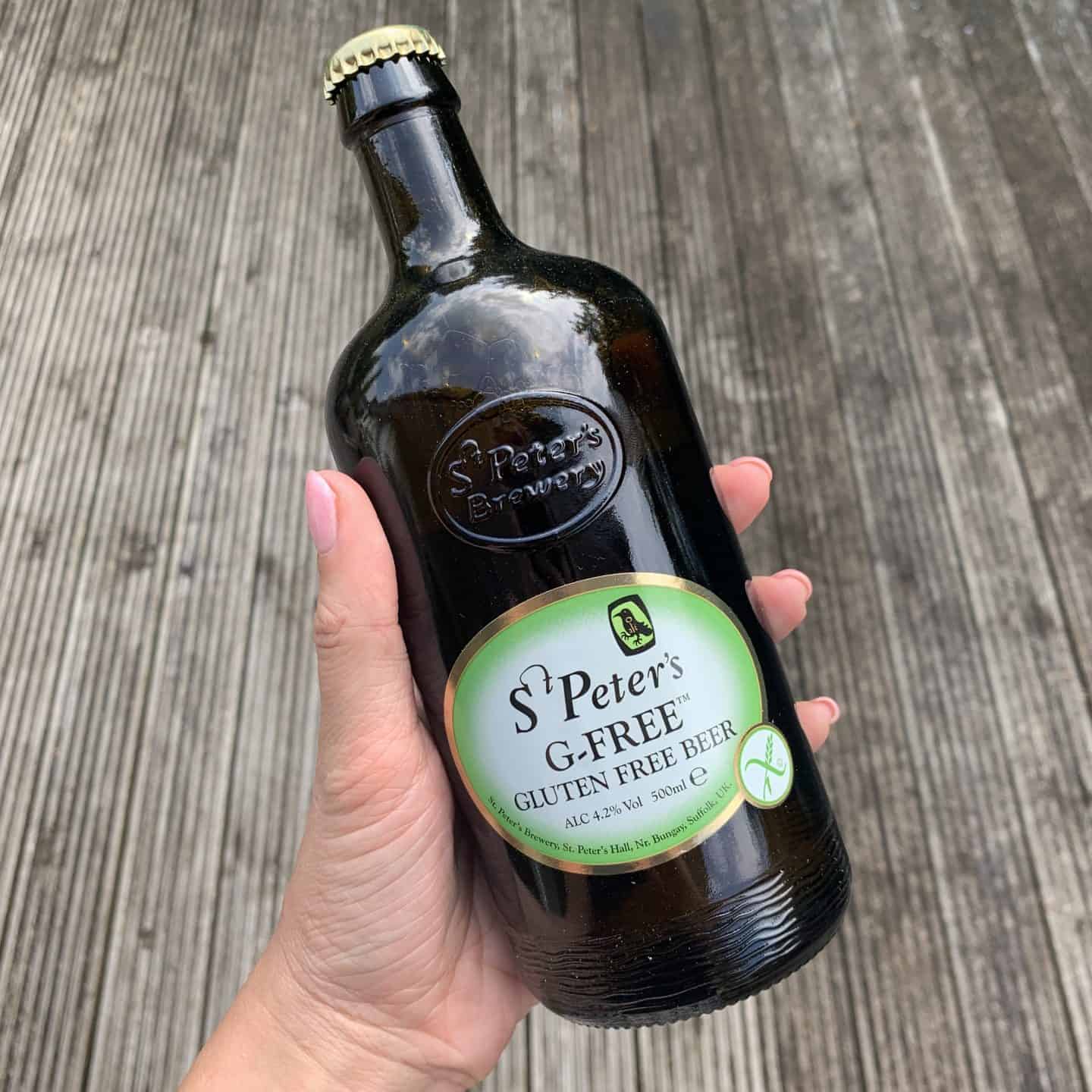 St Peter’s G-Free gluten free beer was one of the first gluten free beers I ever saw on the shelves. It tastes lovely – kind of syrupy (sorry but my beer technical lingo is virtually non-existent!) and easy to drink. I’ve seen this in the free from aisles in supermarkets and it seems pretty widely available. 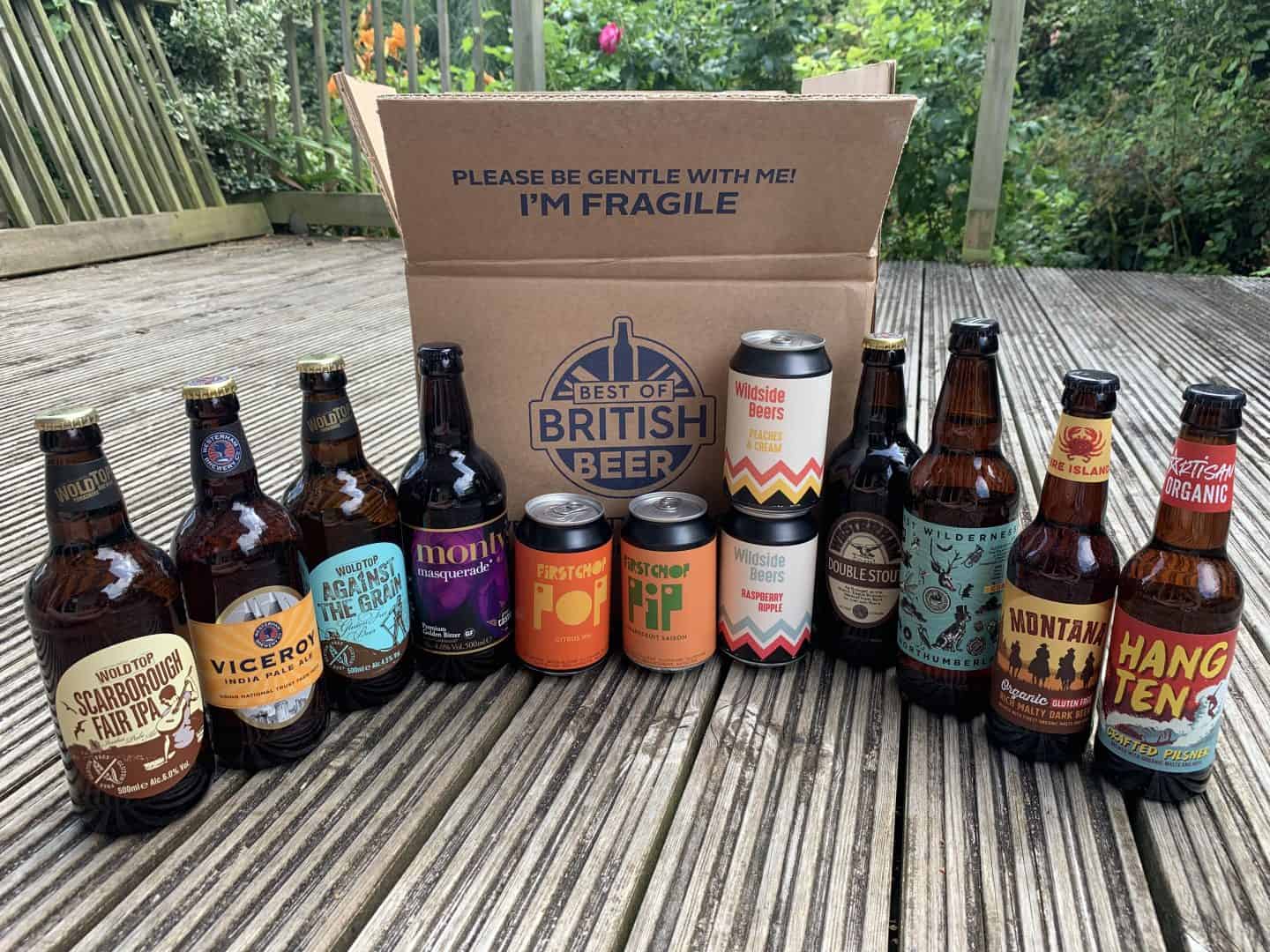 If you want a way to try lots of awesome craft gluten free beers, a subscription box could be the way to go! I was kindly sent this gluten free box from Best of British Beer and it was amazing! You can order gluten free boxes of 6 or 12, or you can also order boxes per brewery if you find one you like! This is definitely one for the beer lovers among us!

What is your favourite gluten free beer?

I’d love to know if there are any amazing gluten free beers out there which I’ve missed off this list! Comment below and let me know your favourites. You can also share them in my friendly Facebook group – it would be great to see you there!

* Starred items have been gifted for review.