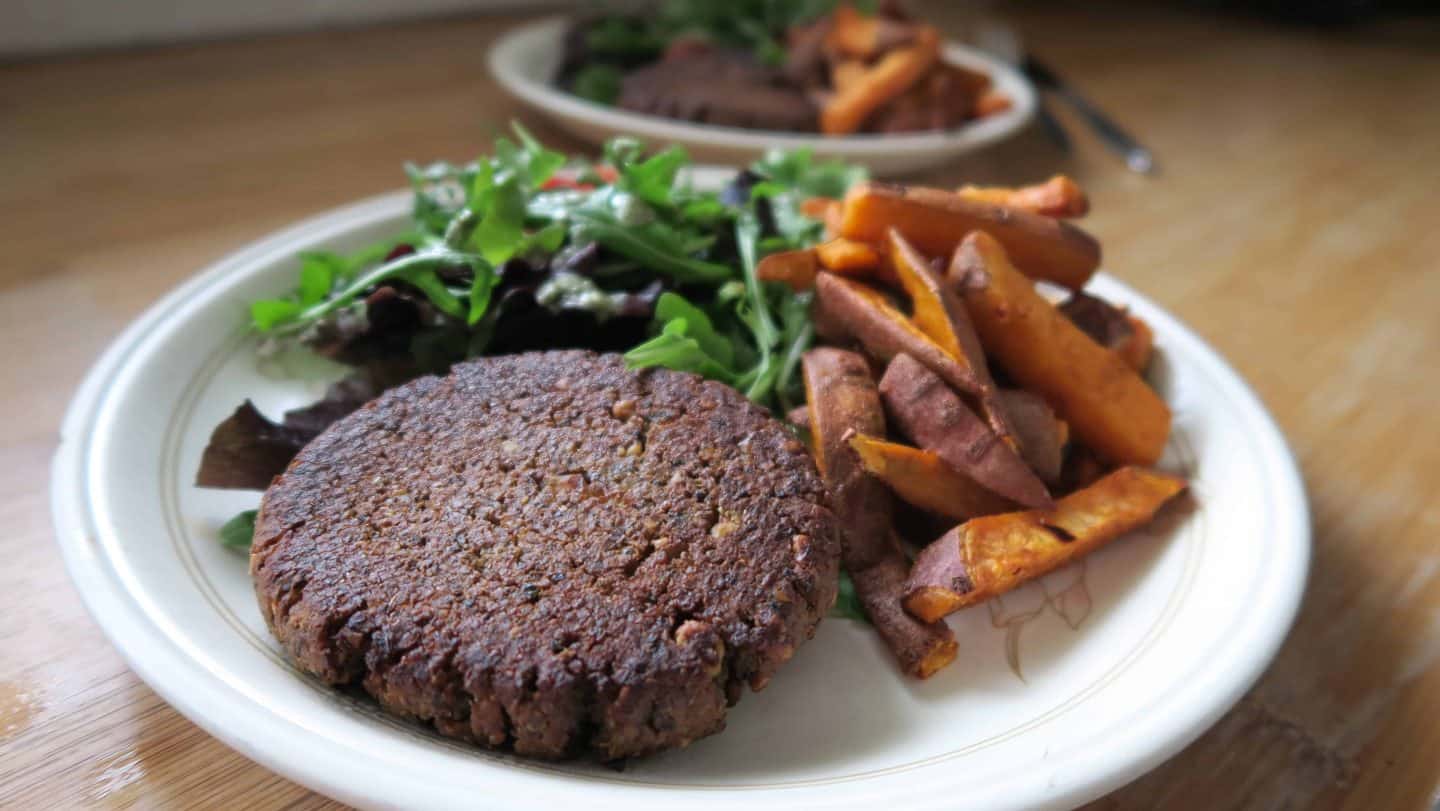 As a self-confessed carnivore, I found myself very surprised when I tried a vegetarian restaurant back in March and it got me thinking – maybe I should investigate more vegetarian food?

I’ll admit, I am still coming around to the idea of having some ‘meat free’ meals in my diet, but when I saw Heck’s new line of vegetarian products, I found myself strangely drawn to them. Usually vegetarian products wouldn’t catch my eye, but I absolutely love Heck and I was intrigued to try these.

So, as today marks the start of National Vegetarian Week, I decided to give them a go, and Heck very kindly offered to send me some samples for me to review. 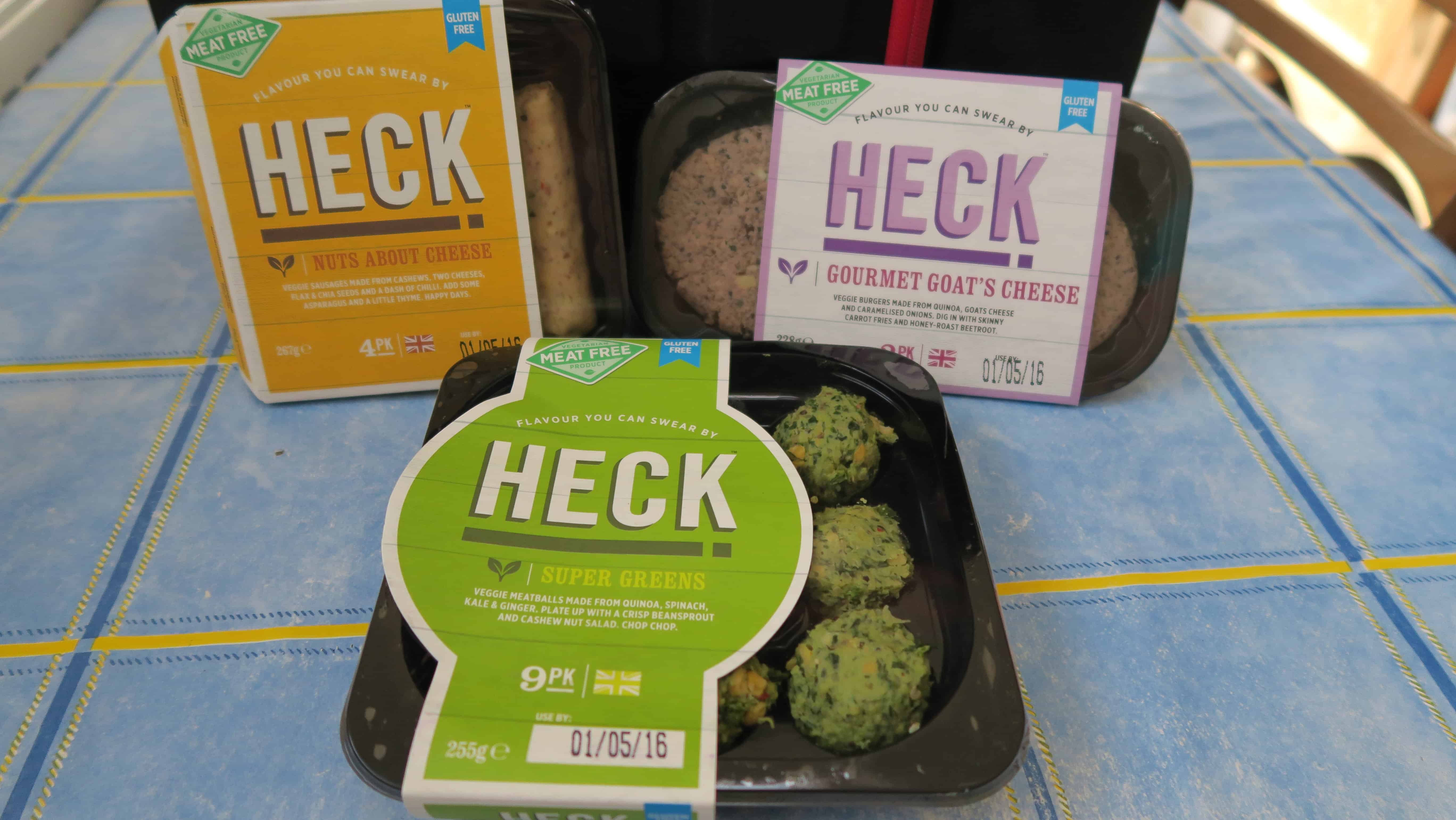 I thought the products sounded amazing, but it took a bit more of a job to convince my even-more-carnivorous boyfriend Steve to embark on some meat free meals with me…

What are Heck’s gluten free products?

Heck has launched three new products in their veggie range. These are…

Super greens: Veggie meatballs made from quinoa, spinach, kale and ginger. These come in a pack of nine and are recommended with a ‘crisp beansprout and cashew nut salad’.

Nuts about cheese: Veggie sausages made with cashews, two cheeses (cheddar and mozzarella), flax and chia seeds and a dash of chilli – these come in a pack of four.

Gourmet goat’s cheese: Veggie burgers made from quinoa, goat’s cheese and caramelised onion. These come in a pack of two and Heck recommend you serve them with skinny carrot fries and honey-roasted beetroot.

I thought they all sounds great – particularly because I am a huge fan of cheese – and really loved the fact they give serving suggestions with the products too. Not that I actually followed them – but I loved the idea of it! Here is how I got  on with each product… 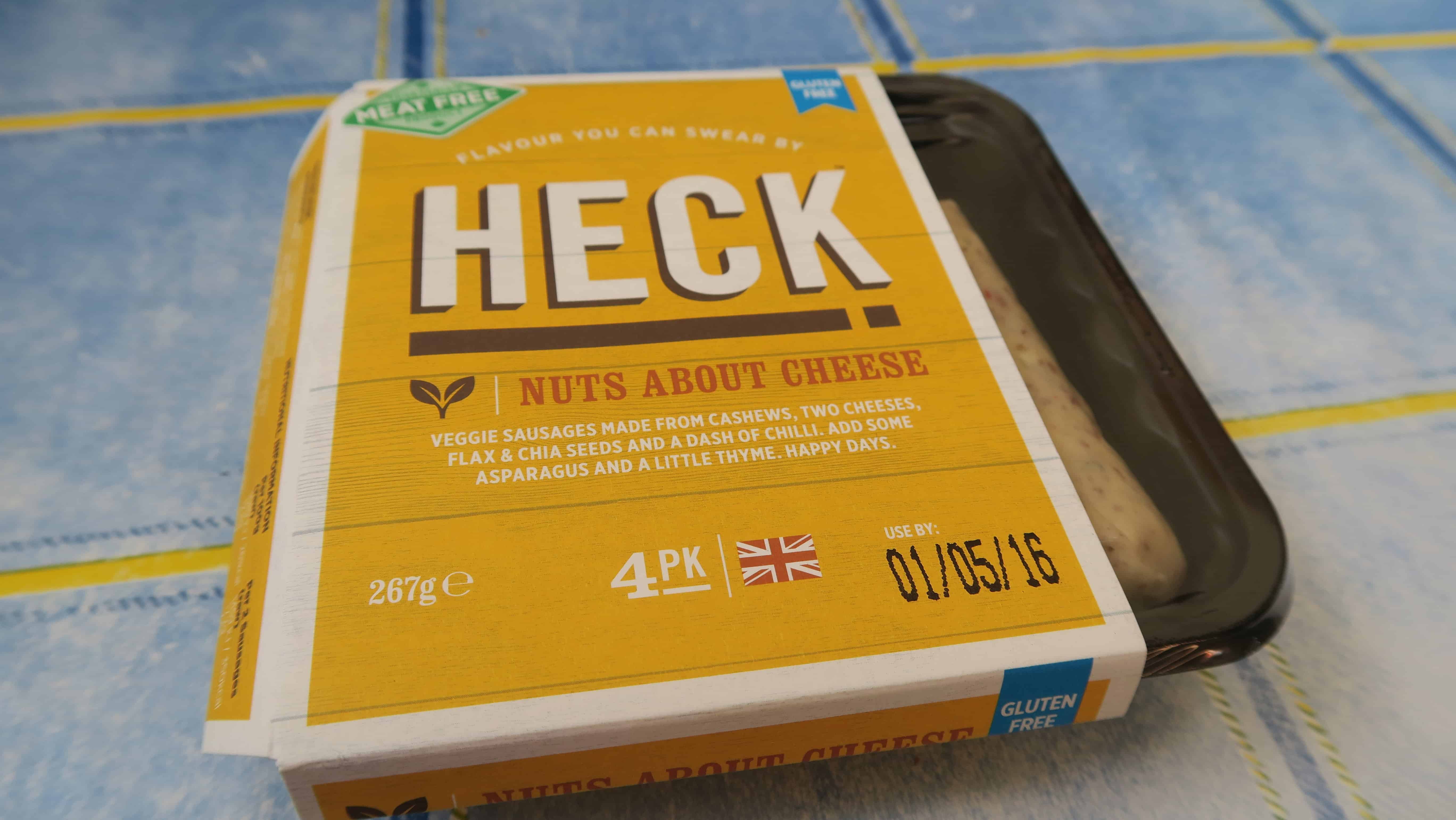 Because I don’t have any experience with vegetarian foods like these, what initially surprised me about these vegetarian sausages was the texture – they are nowhere near as firm as ‘normal’ sausages and are kind of squashy.

I popped mine in the oven (our grill is knackered) and they seemed to explode a little – but despite appearances they smelt fabulous and I loved the sound of the nutty, cheesy flavours. 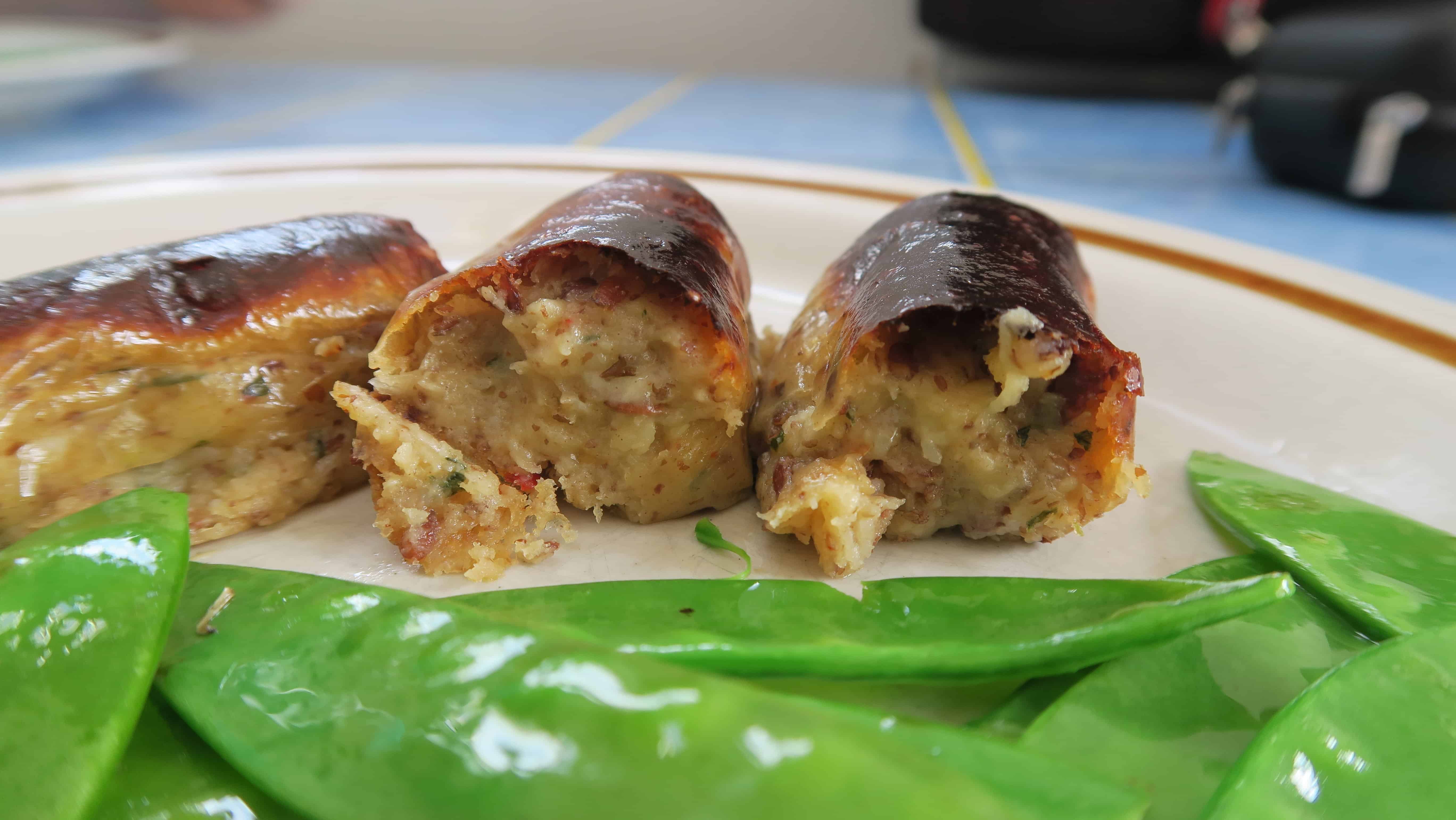 I served these with sautéed mange tout as a quick and easy lunch – and they were delicious. I had no idea to what expect but I was so pleasantly surprised and think I could easily substitute a meat meal for these.

They reminded me a tiny bit of the inside of a cheesy vegetable pasty – though not as potato-y. The cheese was not overpowering and I would definitely buy these again. I think Steve was convinced too – he ate them pretty quickly… 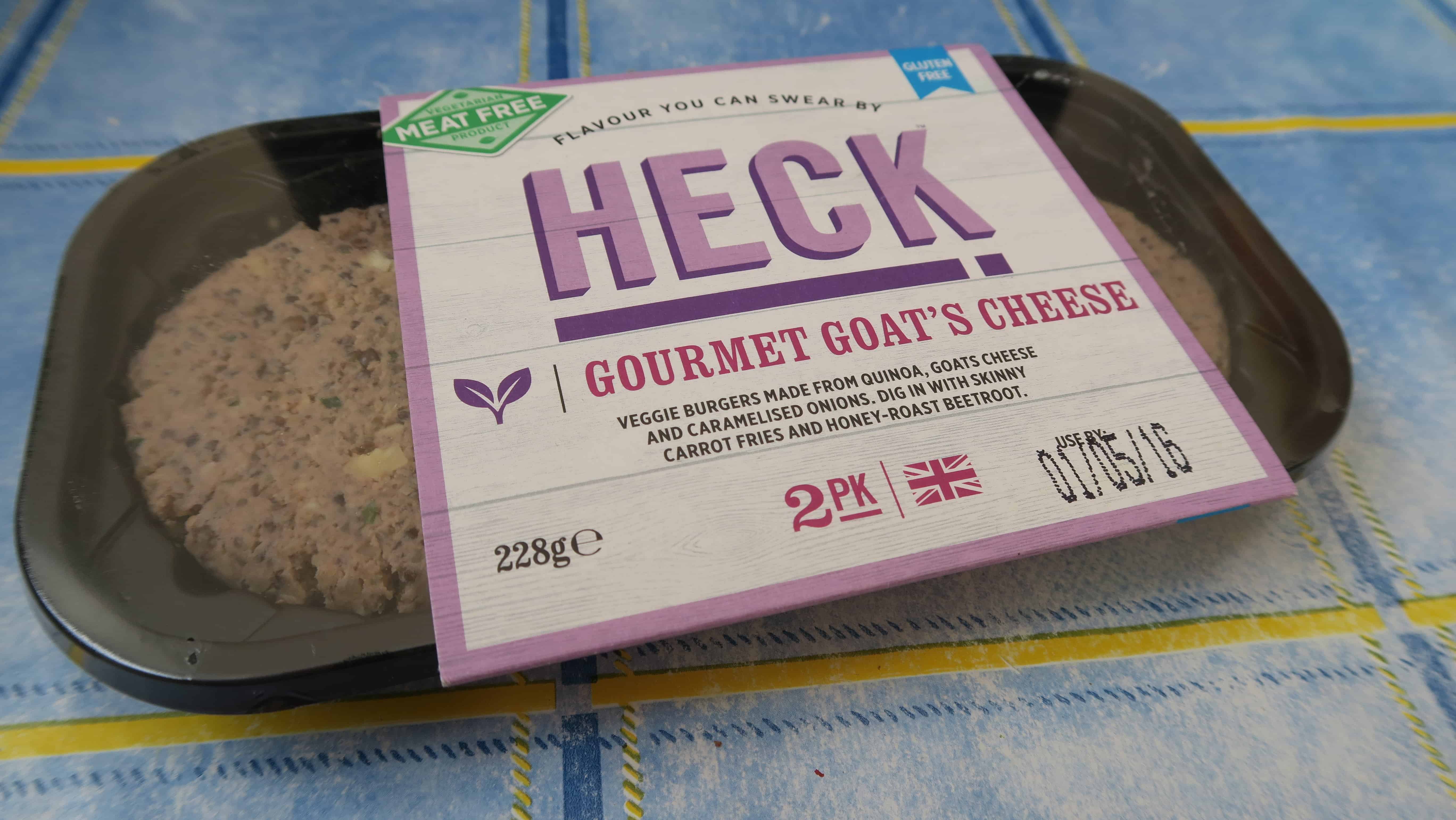 Made with goat’s cheese and quinoa, these burgers sounded intriguing. After the sausages I wasn’t sure what the texture would be like and they felt quite solid when I popped them onto a baking tray. I decided to cook them up with some sweet potato fries.

There was a lovely waft of goat’s cheese as I opened the oven door 20 minutes later and I could already tell these were going to be good. I served them up and swiftly tucked in – and they were impressive. They are a very different texture to a meat burger – they’re a bit harder and sort of crumble rather than cut. 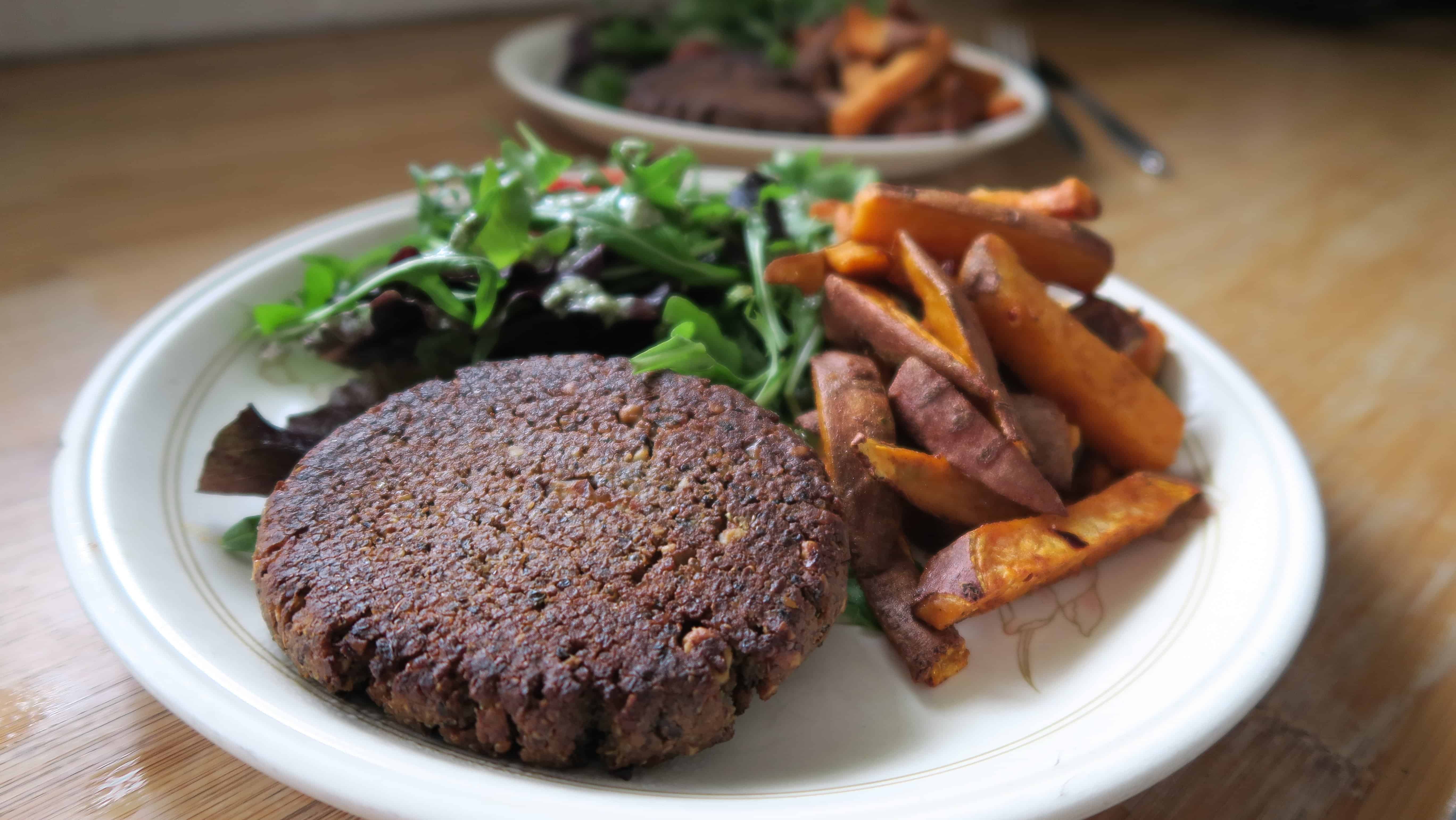 But the flavour was again very impressive. The goat’s cheese was delicious with a sweetness from the caramelised onions and I enjoyed these a lot. Steve said he preferred the sausages but he still ate it without complaint. Again, I would definitely buy these instead of meat for an occasional change. 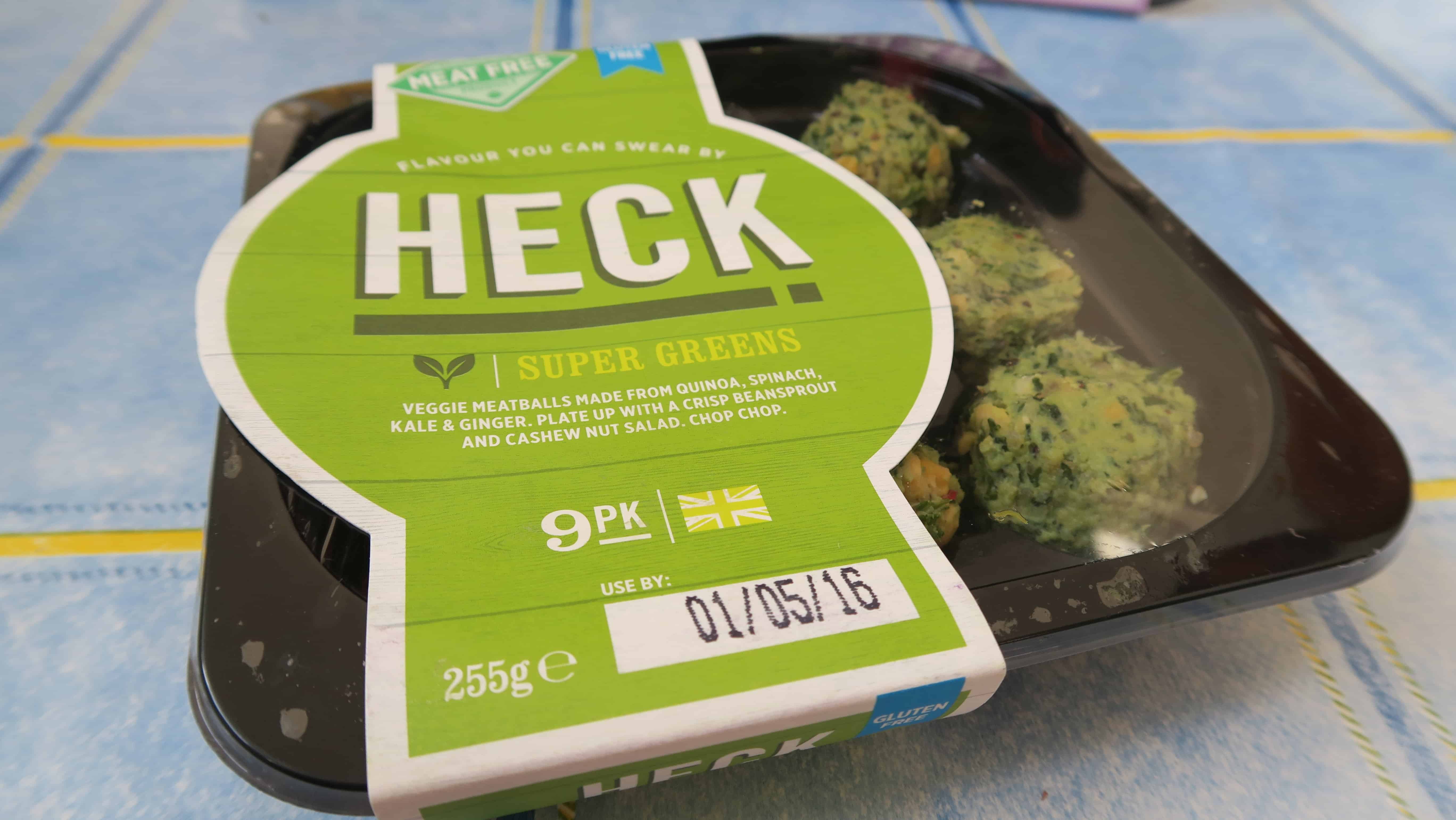 These veggie ‘meatballs’ from Heck are actually vegan as well as vegetarian and gluten free. They look kind of like stuffing balls and are made with quinoa, spinach, kale and ginger.

Heck recommends serving these with a beansprout and cashew nut salad but I decided to make a soy, honey and chilli-coated courgette noodles with cashews – recipe to come later this week! Needless to say, it was a pretty awesome combination. 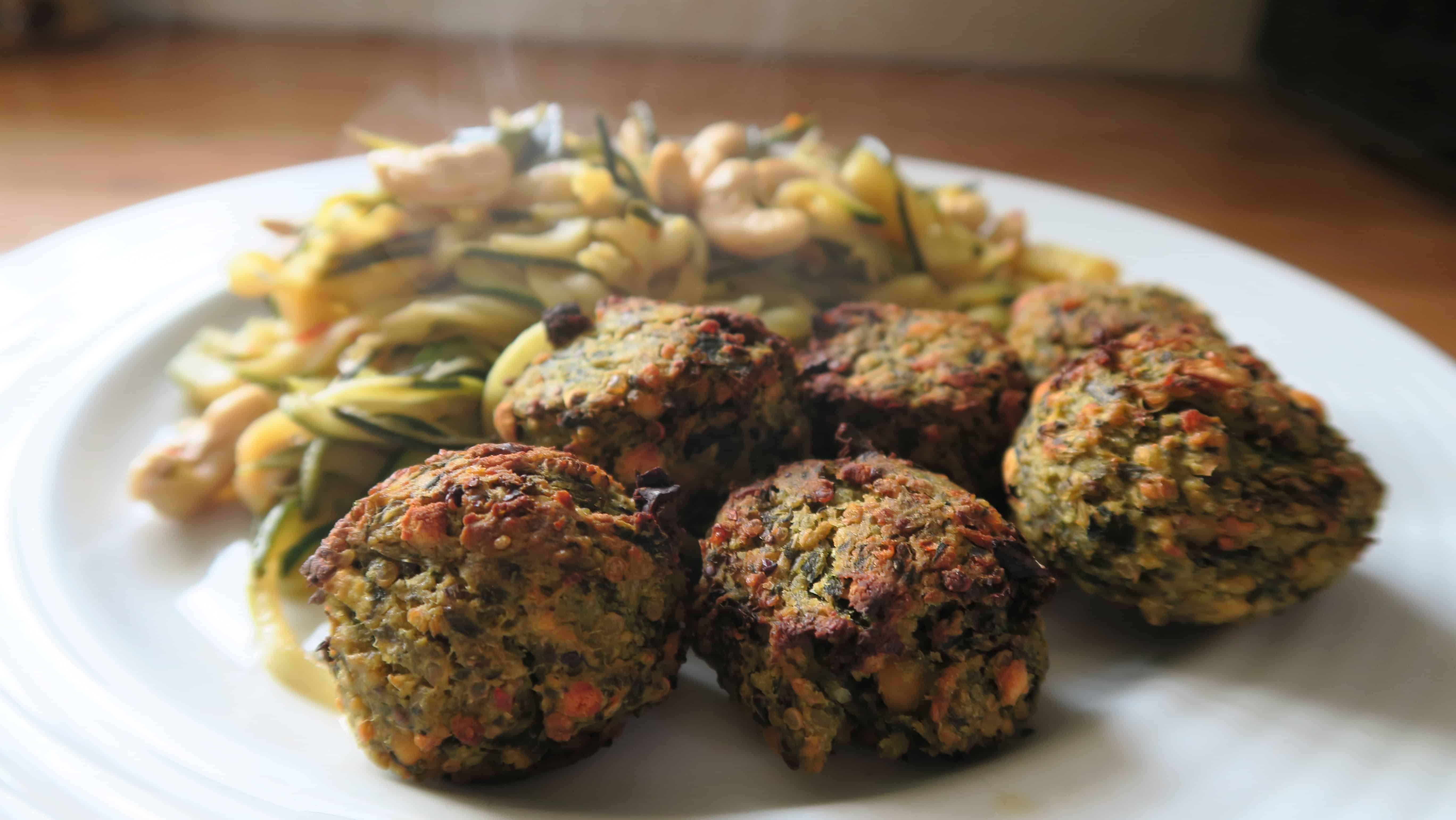 These tasted good and you could definitely taste the ginger in them. I thought they suited the oriental kind of meal we had but they would be equally as tasty cold with a salad. I did think it a bit odd they came in a pack of nine – a bit awkward when sharing between two of you!

I’ll always be a meat-eater at heart and, as yet, nothing is going to change that. But I do see the need to eat more sustainable foods and I like the idea of having some meat free meals once or twice a week at the very least.

I find them harder to fit around my macros, as vegetarian foods tend to be higher in carbs, or involve things like pulses and beans which my gut does not seem to like at all! 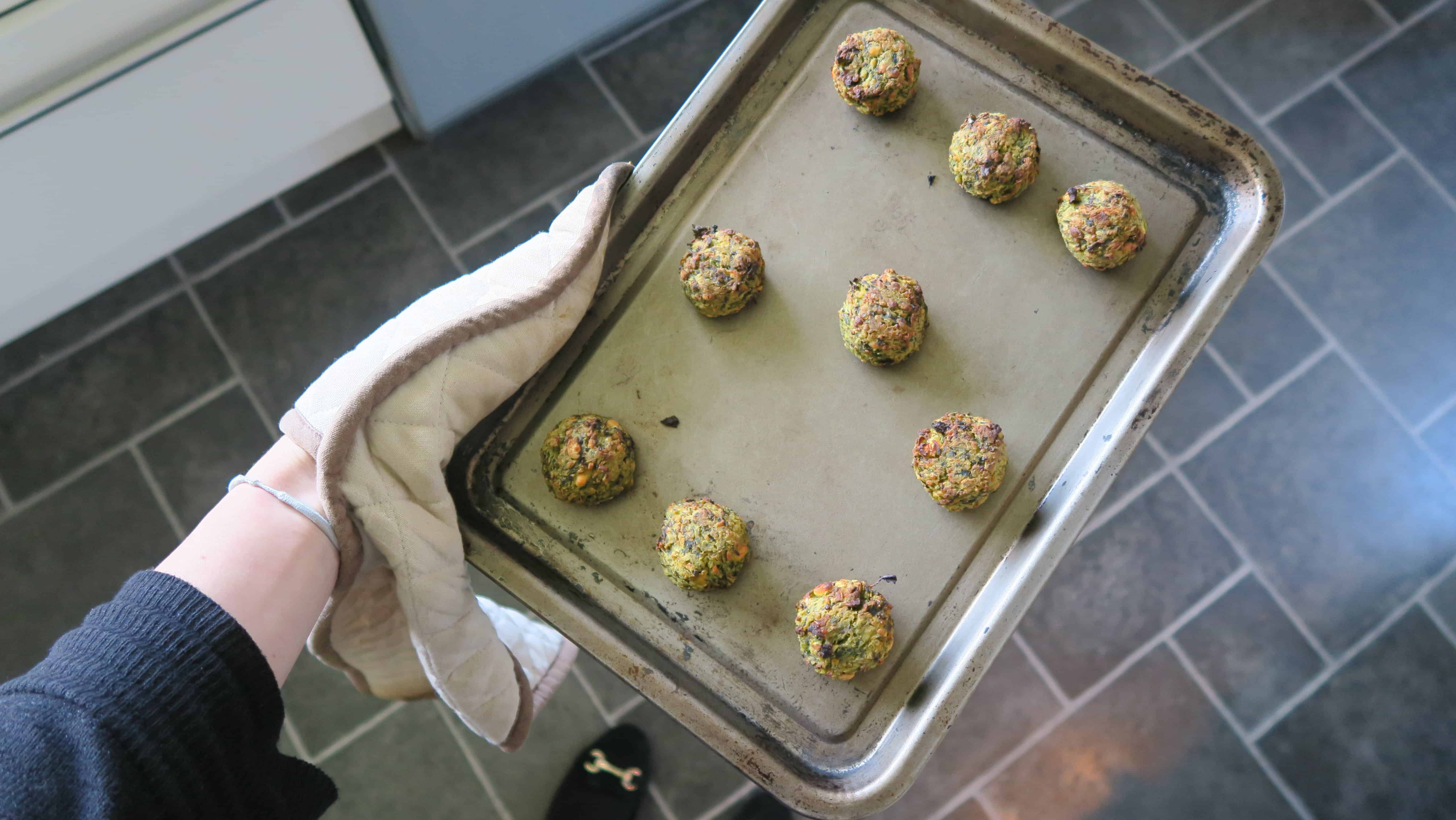 I was really impressed with these Heck products and I would definitely buy the burgers and sausages again. They made a nice change and have altered my outlook on vegetarian food – though their chicken sausages are still amaaazing!

Are you vegetarian? What are your favourite gluten free vegetarian products? I’d love to try more so please comment below and let me know (non soy based though please!).